The legal case for public accessibility is clear. The moral case can be debated. This is as true in tech and digital, as it is for our public buildings.

Last week, Dave, Chris and I took time out to explore issues concerning accessibility for web and mobile apps, and ended up discussing the differences between legal and moral responsibilities. It’s a subject all three of us have a keen interest in.

We’re reviewing our current accessibility position so we can give recommendations to our ace team of UI designers, and software engineers, so we can make sure the apps we ships to the public are right.

To be honest, we found it pretty tricky to keep focussed on our goals in that first short hour together; accessibility is such a broad subject. Moral accessibility was one of the topics that stood out for me. That’s because, by raising the level of the accessibility of the products we produce beyond the minimum required by law, I believe we make the world a better place for people. And I get a real kick out of that.

Last weekend, Dionne and I visited the National Portrait Gallery. We try to get to London’s galleries or museums a couple of times a month; mostly we succeed. I love the Natural History and Science Museums but my absolute favourite is the National Portrait Gallery. It’s hard to put my finger on exactly why but it does have something to do with the faces in the paintings and prints. When I’m there, I feel like I’m with old friends.

Just around the corner from the Portrait Gallery, on Trafalgar Square, is the entrance to the National Gallery. It’s a busy spot. According to Government statistics, over 6.5 billion visitors moved through the building in 2014/2015.

Despite a reported drop in visitor numbers …

… in the case of The National Gallery and The Tate Galleries, UK visits have actually dropped by a conspicuous 20% since 2008/09 BBC News,http://www.bbc.co.uk/news/entertainment-arts-31533110

… that really is a lot of people.

Sounds like you had a smashing weekend but why on earth are you telling us this?

In order to get all these people into the gallery, through the auditorium and on into the rest of the building safely, revolving doors were added to the main entrance at some point. They serve to limit the flow of people in and out of the building, reducing bottle necks. This has the effect of increasing the predicability of the maximum people-throughput in a given period, therefore limiting the bandwidth of the entrance. (Phrasing. Did I mention I work in the tech industry?)

In other words, engineers delivered a feature which improved the overall value (performance, stability) of the building (product).

We get it. It’s like product design. Well done you. You must feel very proud.

Thanks. I sooo do.

As is often the case, there were indirect consequences to adding a feature, even a revolving door.

Should we care about these people? The National Gallery had to, so they added giant swinging fire doors beside the revolving doors. Why giant doors rather than small doors? Because lots of people and things can get through a big doorway in a short amount of time (high potential bandwidth).

And to cater for those not able to open these enormous doors by themselves, they added a big button that opens the door for you, which almost anyone can reach to press, regardless of their height.

Nice one National Gallery. Sounds like you have resolved the fire and accessibility regulations and maybe even some of the moral accessibility issues too.

Great. But you mentioned ‘hidden gems’ (what seems like an age ago).

I’m getting to that. What do you think this is? Snapchat?

So, the thing about revolving doors is that they are a traffic calming feature. They are there to restrict the free flow of too many people. They are serious. They are important. They have a job to do.

But you know what I think of when I see a revolving door?

I go straight back to being a kid. I feel the joy of childhood and I just want to play, be silly and have fun.

These revolving doors were really not put there for my pleasure. There job is not to connect with me at an emotional level, or to take me out of my functional life and slap a silly great smile on my face. Time and time again.

So what you’re saying is …

I’ve lost track of the number of times users have commented on how much they love a quirk in a feature that was originally designed to work around a problem: over-sized fonts which look friendly; high-contrast display modes that look cooler than the original colour scheme.

When we design and deliver products, we have a genuine – and often-times moral, let alone legal – responsibility to make sure these products meet a good level of accessibility.

If we want the fruits of our labour to really work for the people we’re designing them for, our products need to connect with our audience at anemotional level, and we should keep in mind that emotional connections can come from the most unexpected of places.

And if you do manage to bring a hidden gem of JOY to someone, then good for you, go take a few minutes out and celebrate. Maybe even check out some art. Or go for a spin in a revolving door.

If you’ve found any hidden gems that connected with your audience, or you think other people should try to add a bit of joy to their accessibility features, then click the recommend button below or leave a comment. 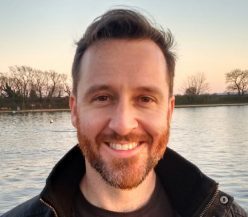